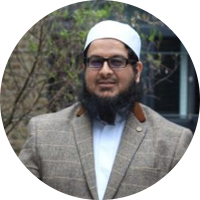 Shaykh Zuber Karim studied the Quran, Sunnah and Fiqh at Bury Islamic College where he graduated with a BA/MA equivalent in Islamic theology in 1997. He has worked as Imam in Dundee University, Perth Mosque and the Ninewells Hospital, Dundee. In 2003, Shaykh Zuber was appointed as a senior lecturer in Tafsir and Usul al-Fiqh at IMZ School, Dundee. Later on in 2009, he attained an MA in Islamic Banking, Finance and Management. He has been the Imam at the newly opened Al Maktoum Mosque in Dundee since 2013. He is also a freelance translator of Islamic scripts and a researcher, and the director of Intelligence Finance Consultancy.