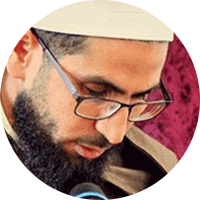 Sjaad Hussain was born and raised in England and began his pursuit in studying the sacred sciences in Damascus Syria. After studying Arabic language in Damascus he began studying the sacred sciences full time under the tutelage of Shaykh Rasul Baksh Sa’eedi. Over a period of 9 years he studied all the major sciences under him and gained teaching licenses (Ijazat) in them. He also studied extensively under Shaykh Muhammad al-Yaqoubi, Shaykh Muhammad Jum’ua, Shaykh ‘Ala-Uddin al-Kurdi, Shaykh Gibril Haddad and Ustadh Ahmad Najaar amongst others.

He is the co-founder of the Path to Salvation Diploma in Classical Islamic Studies, one of the largest Muslim grassroots teaching organisations in the UK and is the co-founder of the Sacred House in Birmingham. Aside from teaching, he is currently developing a 6 year syllabus in Advanced Classical Islamic Studies called “The Sacred Texts Syllabus” as well as working on several academic works including a Primer in Arabic grammar and an extensive commentary on the famous “Poem of the cloak” of al-Busiri.