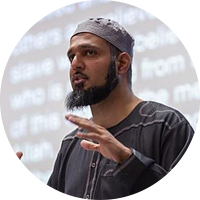 Shaykh Amer has been described by the Sunday herald as one of the Scotland’s most prominent and respected Muslim thinkers. He holds a (LLB) law degree from Strathclyde university and BA (Hons) in Islamic studies from the University of Wales. He spent 10 years studying the Islamic sciences including 6 years with distinguished scholars in the Middle East (Syria and Yemen), gaining him teaching licenses (ijaza) in various Islamic sciences.

His main field of interest is primarily Islamic family law; an area in which he has studied in depth having studied all four schools of Islamic jurisprudence. Currently, he is conducting a PhD research on the relationship between Islamic family law and Scots family law. He also has a certificate in counselling skills accredited by COSCA (Counselling & Psychotherapy in Scotland).

He is an Islamic family law consultant to a local Scottish law firm and a Family support consultant at Unity Family Services. Part of his role at Unity involves delivering pre-marital and post-marital courses UK wide (www.unityfamily.co.uk/events.html). In 2007 he authored the booklet “What Islam Really Says About Domestic Abuse” available at (www.unityfamily.co.uk/people.html). He is also the author of the Reminder series – a series of short leaflets covering contemporary issues affecting the Muslim Community and wider society (www.the-reminder.co.uk).

In 2009 he co-founded the Solas Foundation and with Shaykh Ruzwan Muhammad, established the iSyllabus Islamic studies program. He is currently the co-director of the programme. He is also the Muslim Chaplin at Glasgow Caledonian University, where he delivers the Friday sermon and regular classes for students. Shaykh Amer is consulted by Scottish Law firms for his specalist knoweldge in Islamic Family Law.

Both he and Shaykh Ruzwan were awarded the ‘Religious Advocate of the year Award’ at the British Muslims awards 2014.