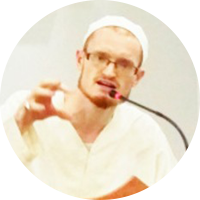 Amin Buxton was born in London. He converted to Islam in 1999 and read Arabic and Islamic Studies at SOAS, University of London. He also studied the Islamic sciences in a traditional setting in both Syria and Yemen.

He has edited and translated a number of books which include Imam al-Haddad’s ‘Beneficial Counsels’ and Umar al-Khatib’s ‘Prophetic Guidance’.

Since 2017 he has resided with his family in Edinburgh, Scotland. He is involved in several educational and social initiatives including New to Islam Edinburgh and Rafah International.